Scaffolding is difficult to miss, isn’t it? But it’s such a part of our daily lives chances are you’ll pass some up against a humble home extension, historic building restoration or a financial district skyscraper and not give it a second glance

But did you know, sockets in the walls around the paleolithic cave paintings at Lascaux, France, suggest a scaffold system was used by the decorators! It seems that the original scaffolding companies go back over 17,000 years!

The ancient Greeks, Egyptians, Nubians and Chinese all used scaffolding-like structures – often made out of wood and secured with ropes – to construct and repair tall buildings. 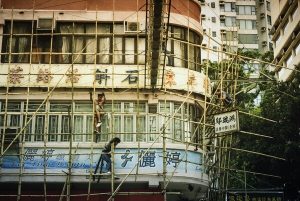 The scaffolding equipment most used these days was bought about by Daniel Palmer Jones and David Henry Jones, two Brits who modernised scaffolding installation standards, practices and processes. Palmer-Jones patented the ‘Scaffixer’, a coupling device that revolutionized scaffolding construction in 1913. He then followed this up with the improved ‘Universal Coupler’ in 1919, which became the industry standard. Early in the 20th century, standardised tubular steel piping was introduced, giving us the scaffolding we still see today.

Now, whether you’re a home-owner planning your first extension or an experienced developer who simply wants to know more about something we all tend to take for granted, the team at specialist scaffolding company TWK Scaffolding has put together this simple guide to scaffolding for you.

Scaffolding, also sometimes called a scaffold or staging, is a temporary structure used to safely support the workforce, materials, tools and equipment used in the construction, maintenance and repair of buildings, bridges and all other man made structures.

Scaffolding installations are widely used on construction sites to get access to heights and areas that would otherwise be hard to reach and work at.

How does Scaffolding work?

Have you ever walked past a scaffolding installation and wondered how the scaffolding company put it up and keep it up at such a height, often in the most demanding site and weather conditions?

So how does scaffolding erection actually work? How do all of those metal poles, wooden boards, gates, hoists and all the rest of it stay together and upright and not simply collapse?

It’s all down to physics. In 1774 Leonhard Euler (pronounced Oiler) was the first theorist to work out the formula that gave us the ‘critical load’ under which a scaffold would begin to buckle. Keep the load or weight being supported lower than the critical load amount and you’ll be absolutely fine. Euler’s formula is still used today for accurately determining the ‘critical load.’

A number of factors need to be taken into account when considering your critical load. These include variables like the material, shape, length and distance between the supports of your scaffolding.

When correctly constructed with simple but effective design, scaffolding equipment is a safe, reliable, relatively cost-effective and indispensable part of many commercial projects.

That’s why, even in our high-tech, inter-connected world, you’ll still find the humble scaffold being used in countless building applications including activities such as cleaning, decorating, renovating and restoring properties.

You’ll also see a scaffolding installation put to a wide range of other uses from formwork and shoring up to grandstand seating, concert stages, exhibition stands, boat yards and access and viewing towers. You’ll even find it used in places you’d never considered, such as supporting ski ramps, half pipes for skateboarders, advertising hoardings, art installations and over water.

Are there different types of Scaffolding?

Yes and the number varies depending on which local scaffolding company expert you ask but these are the most widely used:

This is generally used for stone masonry and so it’s referred to as mason’s scaffolding. It’s called double scaffolding as it’s hard to make holes in stone walls for support putlogs, so two rows of scaffolding are used to ensure it’s sturdy.

This is a type of scaffolding where the uprights or standards are supported on a series of ‘needles’ that are taken out through holes in the building’s wall.

Often used in external repairs, in suspended scaffolding the working platform is ‘hung’ from roofs with the help of wire ropes or chains.

Like a trestle table, in this kind of scaffolding the working platform is supported on movable tripods or ladders and is generally used for internal works.

The one we’re most used to seeing, this scaffolding is built up from steel tubes that are secured together by couplers or fittings. It’s strong, stable, durable, fire-resistant and is usually fast and simple to erect.

These proprietary, ready-made brands of scaffolding are usually of steel construction with their own special fixtures, fittings, couplings and frames etc.

When discussing the subject with a professional from a scaffolding company you might also hear these descriptions used:

A temporary structure erected on the exterior of a building to provide construction workers with access to hard to reach and high areas.

A temporary structure used to provide support to a building that may be otherwise unstable, it can be used internally and externally.

Systems that are primarily used to access taller structures during construction projects to provide additional safety and stability when working at those heights.

An independently built structure, often at a single storey level to allow work at that point without restricting access to the remainder of the construction site.

Are there any height or other limitations with Scaffolding?

Here in the UK, scaffolding regulations have developed over time for one purpose – to ensure safety. This is a highly regulated space where the prevention of injury and death from falls and keeping the site and its environment safe for all workers, visitors and passers-by is paramount.

In general, the scaffolding industry is governed by the Work at Height Regulations (WAHR) that came into force on 6th April 2005.

You can tell how seriously safety is taken in the scaffolding industry by the number of bodies that regulate it. These include the HSE (Health and Safety Executive), NASC (National Access and Scaffolding Confederation), PASMA (Prefabricated Access Suppliers’ and Manufacturers’ Association) and CISRS (Construction Industry Scaffolders Record Scheme).

As a result, there are numerous limitations and considerations that have to be applied to scaffolding. These range from the stability of the ground and the proximity of power cables and the general public to the strength of prevailing winds.

Most scaffolding companies working around residential properties will follow an established, standard configuration, with the structure being built from the base upwards to a set design.

But, if they cannot use a straightforward standard configuration, a competent person – either a scaffold contractor or designer – must create a bespoke design to ensure the strength, rigidity and stability of the structure while it is built, used and dismantled.

When is scaffolding required?

Whether you need scaffolding in a domestic or commercial construction project depends on the size, type and complexity of the work being considered.

There’s no doubt that some quick, simple jobs can be undertaken safely and effectively from a ladder but scaffolding is best used whenever you require:

*the health and safety of the site, premises and anyone working on it to be safeguarded

*teams of tradespeople to work on a job simultaneously, which can save time and money

*easier handling of heavy equipment, tools and materials, such as bricks and mortar, which can be stockpiled on the scaffolding before work begins.

When should scaffolding be inspected?

inspected and checked by a qualified, competent professional (usually from a scaffolding company) to make sure it’s safe:

*every 7 days while it’s up

Who rents scaffolding near me?

If you’ve a project in the south of England and are looking for scaffolding services you can be sure of, from a professional scaffolding company you can trust at cost effective prices, then why not call the friendly team here at TWK Scaffolding.

From our head office just outside Bournemouth, we’re a Dorset scaffolding company with operations that stretch from our home county to Somerset, Hampshire, Wiltshire and beyond so you can count on us to design, deliver, erect and dismantle the new build, domestic, commercial, industrial or marine scaffolding you need. All to your requirements, budget and deadline, every time.

How much will scaffolding cost?

Many factors impact commercial scaffolding hire prices. The project’s complexity and the time it’ll take to erect and dismantle the structure being the most obvious.

Here are some of the issues scaffolding companies will take into account while estimating the cost a project:

*the size and height of the scaffolding; for example, are single or multiple levels required

*the quantity of materials needed

*how long the scaffolding will be up

*the time it’ll take to erect and dismantle the structure

*access issues (for example, blocking roads or paths) as the contractor will be required to get a licence for any scaffolding they put up on the highway, including pavements.

*a contingency, in case the scaffolding is needed for longer than anticipated.

It’s widely reported that man-made obstructions built of brick, concrete and steel materials in bridges, buildings and, of course, scaffolding can create issues with everything from satellite to mobile phone signals.

So discuss this eventuality with a scaffolding professional, most will have experienced the problem and know ways to help alleviate it.

Note that commercial scaffolding has no impact on the networks used for today’s broadband services (which use telephone lines), so web-based calls (through, say, What’s App) and media services (like Netflix) will continue to function as usual.

What are scaffolding planks made of?

Here in the UK, scaffold boards (to give them their correct name) are made from slow grown spruce (Whitewood) Picea Abies and sometimes Pine (Redwood) Pinus Sylvestris from Northern Europe, although the timber can sometimes come from as far afield as Canada.

Look for the British Standards Institute BS 2482:2009 (or the organisation’s Kite Mark) on the metal end bands as a minimum guide to quality.

As you can imagine, scaffolding boards get a lot of wear and tear, so they should be checked for stability regularly. Most tend to be recycled at the end of their useful life.

Is it a bad idea to put up DIY scaffolding?

The essential purpose of scaffolding is to provide safety for those working on or close to it while giving them with a stable, robust base to reach heights and places they wouldn’t normally be able to work.

It’s a requirement of the Work at Height Regulations that scaffolding should be designed, erected, altered and dismantled only by competent people with the work always being carried out under the direction of a competent supervisor.

For those reasons, we’d say DIY scaffolding is a terrible and potentially dangerous idea.

So if you’d like to know more about scaffolding or have a confidential, no obligation discussion about your scaffolding needs, please call the specialist scaffolding company, TWK Scaffolding, on 01202 537305 or visit us at https://twkgroup.co.uk.

Disclaimer: While every care is taken to ensure the accuracy of the contents of this article, it is for informational and educational purposes only and does not constitute professional advice. We cannot accept liability for the consequences of any actions taken regarding this article and are not liable or responsible for any damages resulting from or related to your use of this information. Before undertaking any project that involves the use of scaffolding, seek advice from a fully trained, qualified and professional scaffolding contractor.